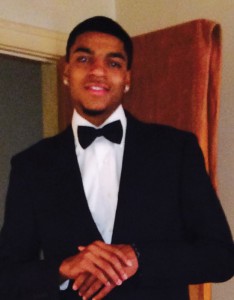 Seventeen years ago I was born at Daniel Freeman hospital in Inglewood, California. Raised by my mother and father in a poverty stricken neighborhood, the statistics were always against me. That was my motivation to become dedicated to my craft and ﬁnd the best way out. I lived across the street from Dorsey High School, and attended Baldwin Hills Elementary. I’ve remained an honor student since second grade and continued to impress my teachers and stay at the top of my class. Since I was old enough to understand how important an education was, I have put my all into it. If I had to describe myself in one word, intellectual would be that word; others would also describe me that way.

Also, my peers would often describe me as a leader. My leadership qualities came from playing little league sports and the local park. At the age of seven I began to play football, baseball and basketball. On every team I was the leader and the captain of the team. For Baldwin Hills football, the coaches taught us life lessons outside of football, and one of those lessons was becoming a leader. I was taught that being a leader was leading by example and being a leader makes you stand out and sets you as a role model. Leadership is not only good on the ﬁeld but in the classroom as well. I took my grades very seriously and understood that education leads to success. My plans in life are to take my education very far. I want to ﬁnish graduate school and then move onto medical school. That is a set goal in my life, and nothing can deter me from achieving that goal. I understand it is a hard milestone to reach, and there will be barriers but I know that anything worth having is worth ﬁghting for. I plan to become a sports surgeon and open up a medical/rehabilitation center in the area that I grew up in because we didn’t have one where I grew up. I can’t wait to reach my long-term goal and be able to look back and say “I made it”.